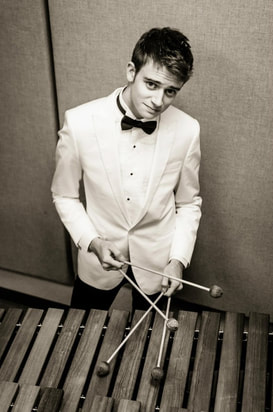 Trevor Barroero, percussionist, has been the gold medalist of 13 concerto competitions, resulting in opportunities to perform as a marimba soloist in Canada and as guest timpanist of the Moscow Symphony Orchestra in Russia. As winner of the 2018 National Collegiate Solo Competition, he most recently traveled to Washington D.C. to appear as a soloist with The United States Army Band "Pershing's Own.”

In 2018, while in the process of completing his master’s degree at the University of Georgia, Barroero won his position as Principal Percussionist of the Orlando Philharmonic Orchestra. It was during this one-year position that Barroero was able to share the stage with world-renowned soloists and celebrities such Rhiannon Giddens, Grammy-award winning singer, and Colin Mochrie, improv comedian from the television series, Whose Line is it Anyways. Barroero has also shared the stage multiple times with Andrea and Matteo Bocceli, performing on their concert tour of Orlando and Miami in 2019 and appearing alongside them on two ABC Primetime Specials recorded on the Magic Kingdom Stage at Disney World in 2018.
​
A founding member of the percussion trio, Lineage Percussion, Trevor Barroero made history in May of 2016 as his ensemble won the bronze medal at the Fischoff National Chamber Music Competition, becoming the first percussionist, in the 43-year history of the competition, to be selected as a senior-division finalist.
Dedicated to using music as a tool by which to empower and inspire others, Trevor has organized benefit concerts over the past few years to raise nearly $10,000 for the Alzheimer's Association. And, as an endorsed educational artist with Mike Balter Mallets and Remo Drumheads, Trevor has presented masterclasses for over 3,000 students throughout Arizona, Georgia, and Florida.

A native of Tucson, Barroero was selected as one of 22 Flinn Scholars in the state of Arizona in 2012. He received his Bachelor of Music in Percussion Performance with Honors from The University of Arizona, graduating Summa Cum Laude as the elected Outstanding Senior of the entire UA College of Fine Arts. He received his Master of Music, via full graduate assistantship, from the University of Georgia in 2017. Trevor is currently pursuing his Doctor of Musical Arts in Percussion Performance at UGA as Director of UGA Steel Bands. Barroero is a student of Timothy K. Adams Jr., former timpanist of the Pittsburgh Symphony and Kimberly Toscano Adams, former timpanist of the Tucson Symphony.